National program for early detection of colorectal cancer is implemented in Serbia and includes men and women aged 50 to 74 years.

Very simple test can detect polyps that may arise into cancer. This test can be used for detection of cancer at an early stage when treatment is more successful.

Colorectal cancer is the second most common malignancy in morbidity and mortality. Every year around 4500 people are diagnosed and more than 3000 die from this cancer.

Why does colorectal cancer occur?

The exact cause of cancer is not entirely clear. It most commonly occurs as a consequence of hereditary and environmental factors, diet and lifestyle.

The risk factors are a diet rich in red meat and animal fat, smoking, alcohol, obesity and lack of physical activity.

Who can become ill from colorectal cancer?

Almost everyone can be diagnosed with colorectal cancer, but it most often occurs in people between 50 and 74 years of age in both sexes/genders.

What are the symptoms of colorectal cancer?

The disease develops with no apparent disturbances  for a long period of time. When the signs appear, the disease is already advanced.
The most common symptoms of colorectal cancer include:

What is the early detection of colorectal cancer? 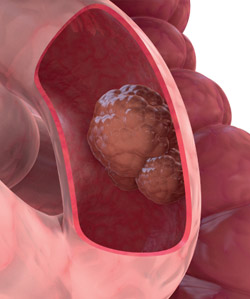 Early detection (screening) of colorectal cancer involves testing of seemingly healthy persons, without presence of symptoms and signs, in order to detect changes, mostly polyps that precede the formation of cancer, or cancer at an early stage.

Polyps are benign growths inside the bowel. Over time, some polyps may arise into malignant change. Duration of the transition of benign to malignant change is measured in years. Detection and removal of polyps before they transform in the malignant lesion, prevent the occurrence of cancer.

There are several methods of screening. Testing stool samples for the presence of blood, which is invisible to the naked eye, which is often the first sign of the existence of polyps or cancer in the colon, is most commonly used method.

All persons who are between 50 and 74 years old should do the test on a hidden bleeding in the stool.

A positive test does not mean the existence of cancer. People with a positive test are referred to colonoscopy to determine the cause of bleeding - a benign polyp, malignancy or other disease of the colon.

If the test is negative, another test for detection of hidden bleeding in the stool is recommended after two years.

Immunochemical test for early detection of hidden blood in the stool

Early detection of colorectal cancer greatly increases the chances of patient survival. Immunochemical test is one of the tests, which in healthy individuals reveals hidden traces of blood in the stool, as the first signs of illness.

This method of stool examination is quick, easy and inexpensive. It is performed by a person alone at home, and the test results are interpreted by a doctor.

People with a positive test are referred to colonoscopy to determine the cause of the bleeding.

Colonoscopy is the examination of the colon, which is done after getting positive results of test on stool hidden bleeding in the early detection of colorectal cancer.

How is colonoscopy performed?

Colonoscopy is performed by a doctor who inserts flexible tube thickness of a finger into the rectum by gently pulling and through the camera on the top of the tube examine the entire length of the colon until its transition into the small intestine.

If the colonoscopy is performed under anaesthesia, it is necessary to take someone in accompaniment, and not to eat the day before, as well as on the day of the examination.

After a colonoscopy the majority of patients can eat right away. That day they should have rest from work and physical activity.

How to prepare for the colonoscopy?

Preparation usually begins two days before the scheduled examination with a certain diet. It is advisable to avoid food such as meat, fruit and vegetables, bread, pastries and foods with seeds and grains. In addition, it is necessary to drink in short time several litres of water with dissolved powder to clean the bowel.

Your doctor will offer the details for preparing. On the day of the colonoscopy do not take any food.  Clear liquid diet is allowed: apple juice, water, and soup.

The patient can take his regular therapy, with the exception of certain drugs, which doctor will warn if it is necessary.

Why colonoscopy is the best examination of the colon?

Polyps are benign growths on the lining of the colon. They may eventually evolve into malignancy. Therefore, their detection and removal is important in colorectal cancer prevention.

Polyps differ in the size, from size of a grain to a few centimetres. As it is not always possible to differentiate benign polyp from malignant lesion, it is necessary to do a biopsy of polyps. Most polyps are removed immediately in whole during the colonoscopy and sent to pathophysiological examination. In larger polyps a tissue sample (biopsy) is first taken. After pathophysiological analysis of the sample it is possible to assess the way of the polyp’s removal. A biopsy is not painful.  The bowel cleansing is important in order to prevent overlook of some polyps.

What are the possible complications of colonoscopy?

Colonoscopy complications are very rare. A possible complication is a perforation or tearing of the bowel wall that could require surgery, as well as, bleeding that occurs after biopsy and usually stops spontaneously.